Let’s talk about how actors are going to audition in the future. The days of physically going to a casting director’s office, sitting in a waiting room with a dozen (or more) other actors, and walking into the room to tape your audition are on hold for now. In an effort to provide a safe and standardized way to hold auditions when production ramps up again, Breakdown Services, the company that owns and operates Actors Access, has launched an audition portal called EcoCast Live.

Actors who already have an Actors Access account should be familiar with EcoCast, the feature which allows audition notices and sides to be transmitted between casting offices, talent reps, and actors. This new live feature will cover the last mile of that process, allowing actors to actually complete their audition for casting directors virtually. It’s essentially a proprietary videoconferencing suite developed to address the needs of our industry.

I attended a webinar presented by the company to introduce the product to the acting community. If you missed it, they’ll be holding more in the future, but you’ll need to get an invitation from a CD or talent agent to participate. Not everyone is going to be able to do that, so here’s an overview of how EcoCast Live is going to work. This is not a sponsored post. I’m not affiliated with AA and all images are copyright Breakdown Services and Actors Access.

Every audition starts with a notice posted by a casting director. Those notices are sent to agents chosen by the CD, and the agent then looks through their roster and submits the actors they feel are right for the role. When you’re submitted, your Actors Access profile is sent to the CD. The CD then tells the agent which actors they’d like to see on the audition. When that’s you, your agent will send you an email invitation to read for the role. Actors will get the same email they’ve always gotten containing the project info, role, breakdown, and sides, but there will also be a link to confirm the EcoCast Live audition.

NOTE: Only actors who have an active account on Actors Access will be allowed to audition. If you don’t have an account, you’ll get an email inviting you to establish one (it’s free). 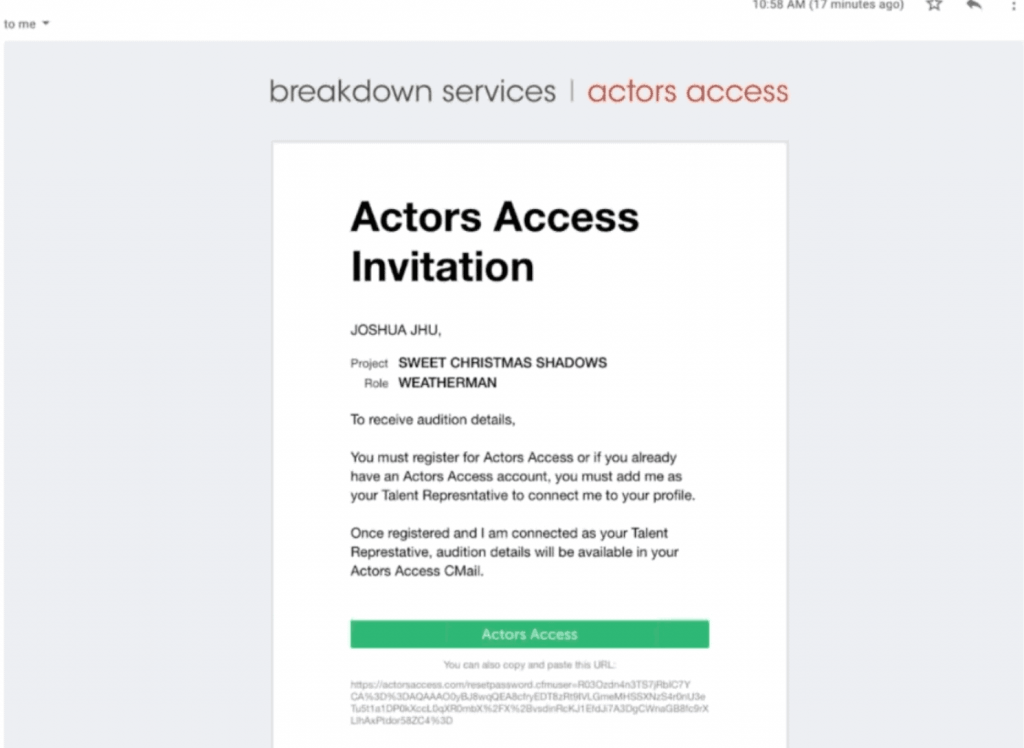 You’ll be asked to confirm that you’re accepting the audition opportunity. Confirming is important because it tells the agent and CD that you’re in. Many CDs give actors a certain amount of time to confirm, and those that don’t are removed from the list. So when you get that email, make sure to confirm if you’re planning to read for the role.

Breakdown Services wanted the platform to be as secure as possible, so every audition invitation is unique. Actors won’t be able to share their links with others, and each will be specific to you, that production, and that role. This is how the system knows the right actor is auditioning for the right role. Once an invitation is confirmed and the audition is held, it will not be re-used in the future.

EcoCast Live is a free service that runs in a browser on either a desktop computer or on a mobile device, meaning there is no app or software to download or buy. It uses the default camera on your device, either your built-in webcam or the camera on your mobile. You can use an external camera, such as a DSLR connected to a computer, but you have to set it up and tell your computer to treat it as the default camera ahead of time. Same thing if you want to use a lav mic, you’ll have to set it up in advance.

The developers of EcoCast Live wanted to replicate the process of auditioning in the real world as closely as possible, and this is where the product really shines. All auditions are scheduled, just like they would be if they were being held in a casting office. When your time approaches, you click on your invitation, which brings you to a screen that will look something like this. 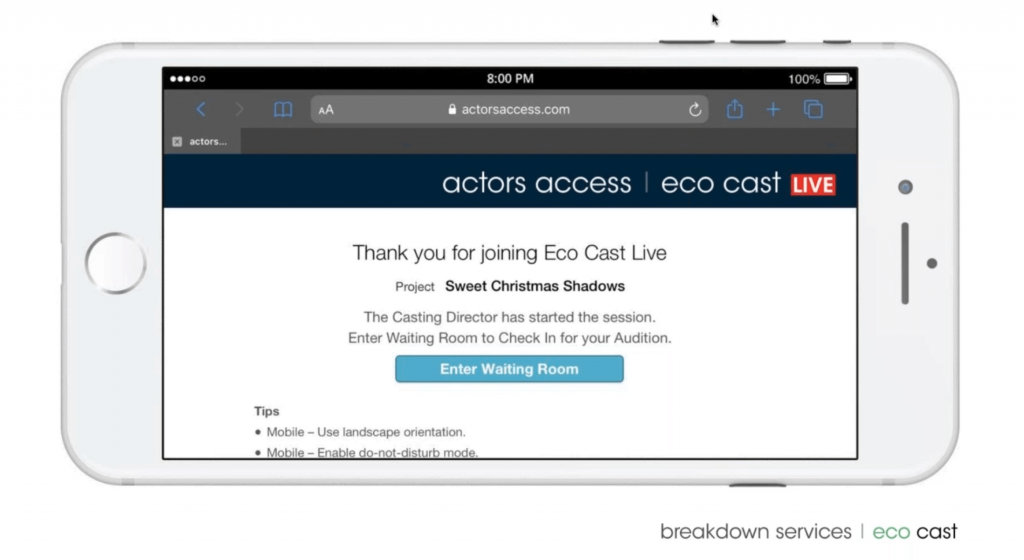 This confirms that you’re auditioning for the correct role. When you’re ready to audition, you click the “Enter Waiting Room” button, which will grant you access to your camera. 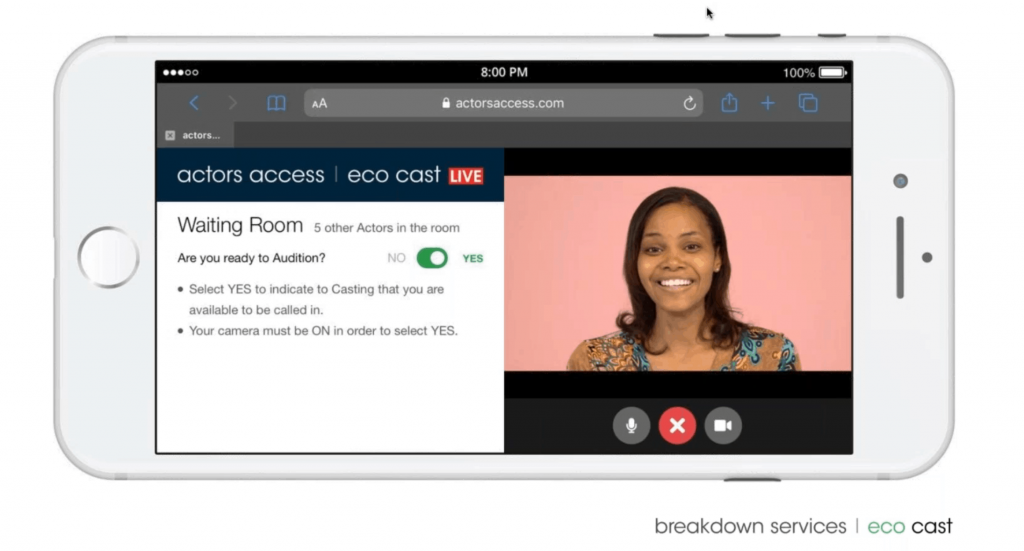 This is the first time you’ll be able to evaluate your camera feed. Check your lighting, framing, and background, and double-check that everything is as it should be. When you’re ready to move into the virtual waiting room, you toggle the “Are you ready to audition?” button to “Yes”. This is like signing the sign-in sheet in the office. It lets the CD know you’re there and you’re ready to rock.

As the actors who are scheduled before you go through their auditions, you may be notified by the CD that you’re on deck, or next up to audition. Your screen will give you this notification. 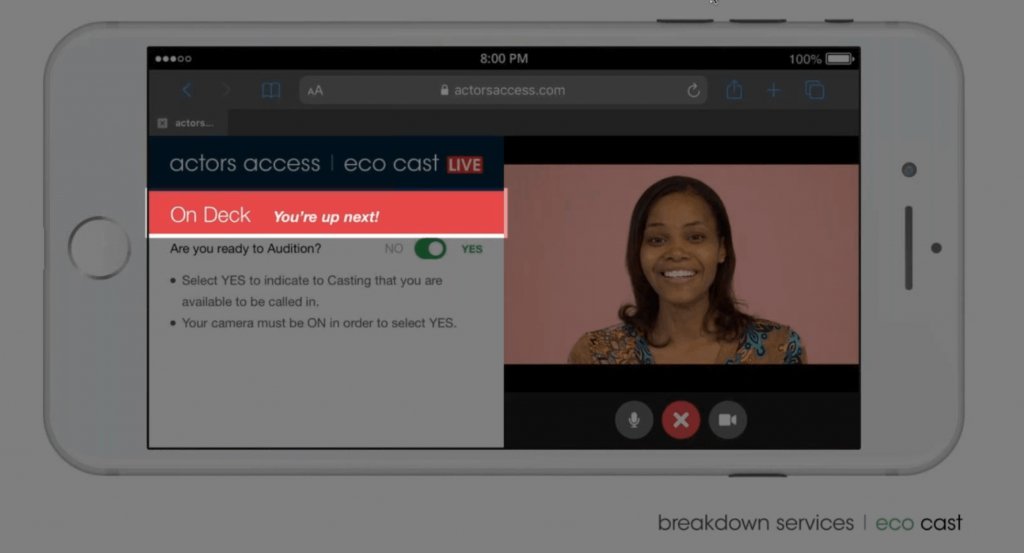 And when you’re up, the CD will admit you to the audition room. It looks like this. 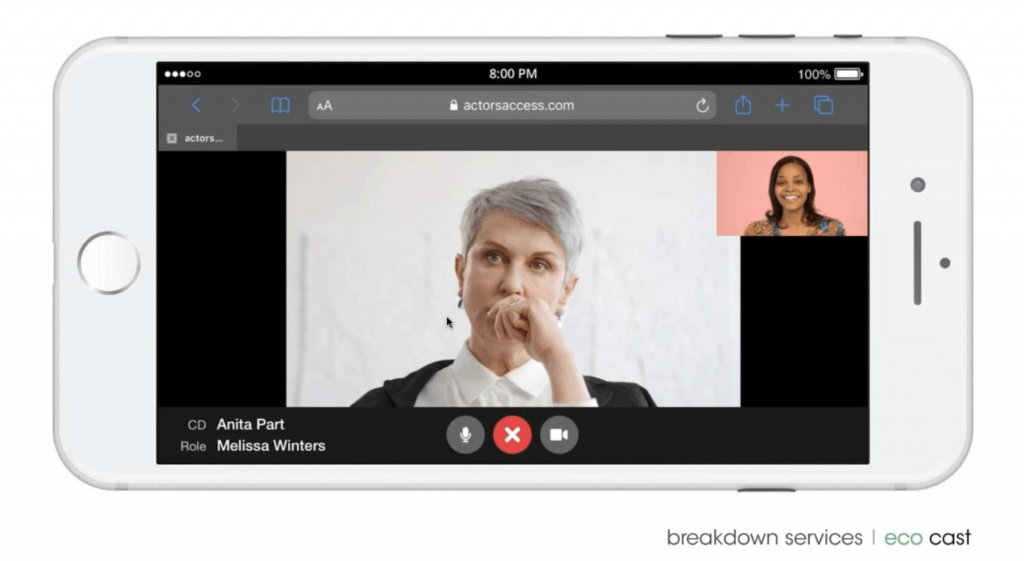 You can see that the CD’s camera feed becomes front and center and the actor’s is minimized. This is to allow you to see your reader, who will appear in the center of your field of view. Actors who audition with their mobile devices should look directly at their reader, not at the device’s camera. This will make it seem like you’re looking slightly off camera, which is the correct eye line for most theatrical auditions. Those auditioning with a laptop or computer with an attached webcam might want to play with where to look, though I always think looking at your reader is a must.

On the other side of the connection, the CD will see this: 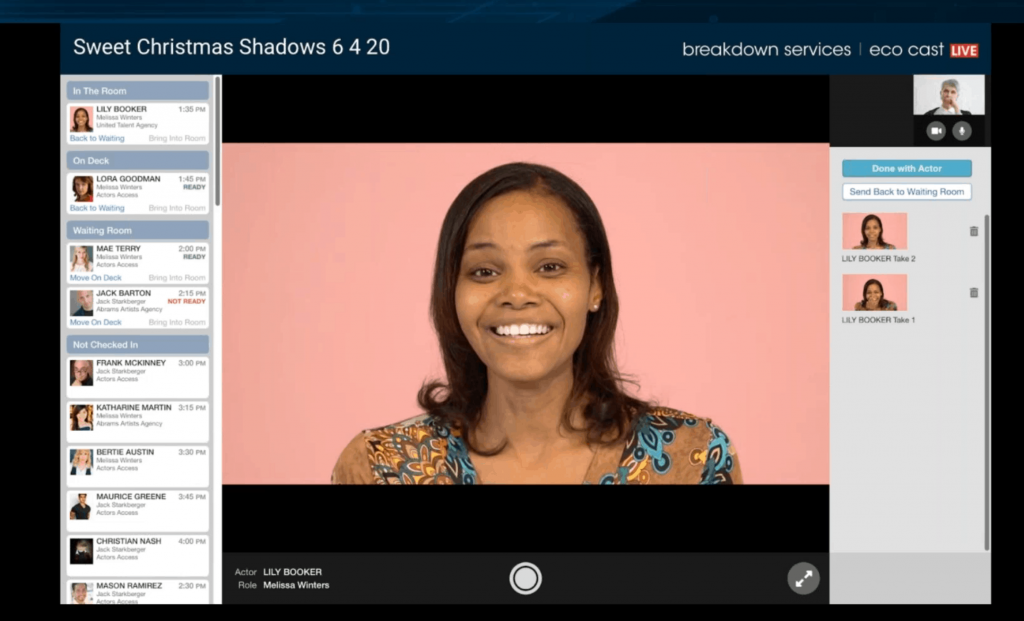 The actor is front and center, and the CD controls when recording begins and ends, and can keep track of takes. She also has easy access to your Actor’s Access profile and knows who is on deck and in the waiting room.

CDs have the option to send you back to the waiting room if need be. Maybe they’ve given you a redirect and want you to consider it before bringing you back in for another take. In that case, you’ll be sent back to where you started, and you’ll have to hit that “Yes” button again to let her know you’re ready for your second go.

When the audition is over, she’ll hit the “Done With Actor” button and move on to the next person. Your takes will be uploaded to the cloud, where they can be stored and retrieved. When all the auditions for that role are done, the CD will put together a presentation for the creative team. They’ll sort their selects and send production a page that looks something like this: 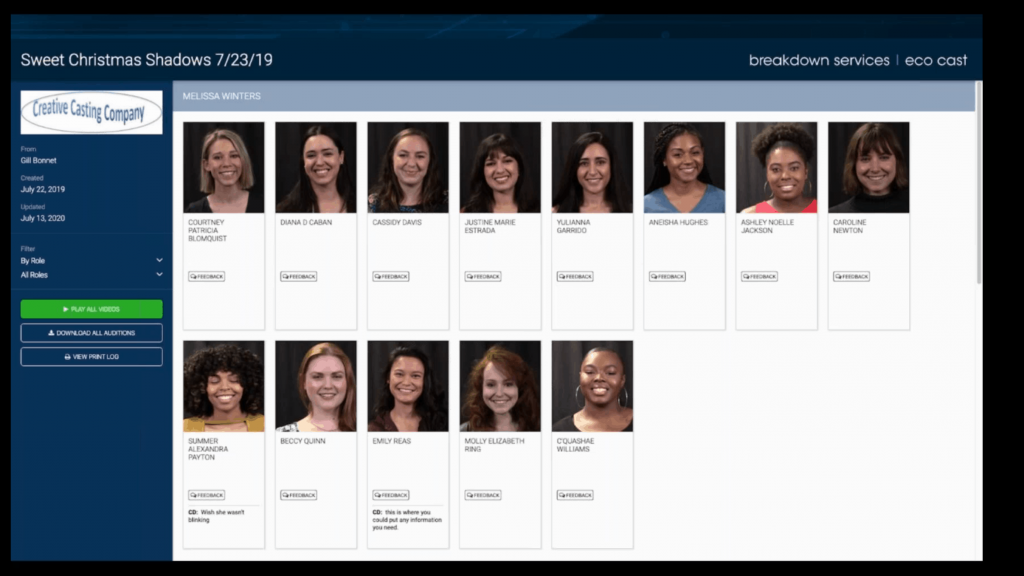 The creatives will be able to see the profiles and auditions of each actor.

You may have noticed that your Actors Access profile comes up in every step of the process. It’s literally your lifeline to any audition, which makes it even more important than it was before. Profiles are free, but they do require maintenance. AA lets you add two photos for free, though adding media can get pricey. However, it’s important to keep your resume, size card, talent reps, photos and reels up to date, because your profile is the only way the industry is going to get information about you.

I was impressed with what I saw, and I appreciate that some of the work of doing self-taped auditions have been taken off the actor’s shoulders. It’s still very important to follow self-tape best practices, but at least with EcoCast Live, we won’t have to worry about uploading files. Make sure your background is plain, your lighting is good, your framing is horizontal and your audio is solid.

Watch this space for updates on EcoCast Live, and if you haven’t already, open your Actors Access account to get ready for the future.